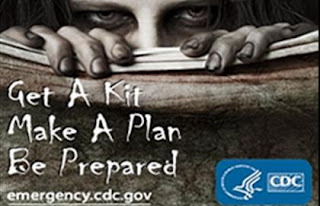 Everyone needs a Zombie plan!!!
The concept of zombies, the CDC helpfully notes, has Haitian and New Orleans voodoo origins and refers to “a corpse mysteriously reanimated to serve the undead.”
But even though science can’t answer that gnawing question “Why do zombies like to eat brains so much?” there is much that everyday Americans can do to prepare themselves in the event of a Zombie Apocalypse.
“That’s right, I said z-o-m-b-i-e a-p-o-c-a-l-y-p-s-e. You may laugh now, but when it happens you’ll be happy you read this, and hey, maybe you’ll even learn a thing or two about how to prepare for a real emergency.”
That’s from the author of this particular medical treatise. Clearly, CDC’s quite concerned about zombies as they’ve brought in the big guns here. In this case, Rear Admiral Ali S. Khan, MD, MPH, Assistant Surgeon General and Director, Office of Public Health Preparedness and Response
After some actually quite fascinating discussion of the various zombie-creation scenarios used in movies, TV shows and literature, as well as a (fictional) medical paper by Harvard psychiatrist Steven Schlozman which posits an Ataxic Neurodegenerative Satiety Deficiency Syndrome, Khan is ready to get down to business.
In a zombie apocalypse scenario, “zombies would take over entire countries, roaming city streets eating anything living that got in their way. The proliferation of this idea has led many people to wonder: ‘How do I prepare for a zombie apocalypse?'”
Khan helpfully offers up tips for surviving exactly such an event which, wouldn’t you know it, also would work in a real emergency.
Warding off zombies, or hurricanes or pandemics, are all about planning, it turns out. First comes creating an emergency kit. The basics from their web site are listed below, with a full list on CDC’s Emergency page.
• Water (1 gallon per person per day)
• Food
• Medications
• Tools and Supplies
• Sanitation and Hygiene
• Clothing and Bedding
• Important documents
• First Aid supplies (although you’re a goner if a zombie bites you, you can use these supplies to treat basic cuts and lacerations that you might get during a tornado or hurricane)
Next comes your emergency plan. “This includes where you would go and who you would call if zombies started appearing outside your door step,” Khan says, noting you could also implement your plan in the case of a flood, earthquake, or other emergency. Planning should include:
1. What kinds of emergencies that are possible in your area, beyond assaults by brain-slurping undead?
2. Pick a place your family can regroup in case zombies invade your home, or you get evacuated because of a hurricane or flood. One right by your house and one outside your neighborhood is good, in case the undead are on a real rampage.
3. Identify your emergency contacts. This can include the police, fire department, and your local zombie response team. Include one out-of-state contact that you can call during an emergency to let the rest of your family know you are ok.
4. Plan an evacuation route. Remember, hungry zombies don’t stop until they’ve eaten brains and you don’t want them to be yours. ” Plan where you would go and multiple routes you would take ahead of time so that the flesh eaters don’t have a chance!” This, by the way, ” is also helpful when natural disasters strike and you have to take shelter fast.”
Finally, rest assured that should zombies invade our neighborhoods, streets and home, wrecking mayhem and slurping grey matter, the CDC’s disease investigation outbreak teams would be right behind them, tracking the source of the zombie infestation.
Finally, Dr. Khan offers up an excellent reason to either encourage or discourage our nation’s best and brightest to consider medicine or emergency response as a career:
“Not only would scientists be working to identify the cause and cure of the zombie outbreak, but CDC and other federal agencies would send medical teams and first responders to help those in affected areas (I will be volunteering the young nameless disease detectives for the field work.)”